Our Durham Fire and Ice pictures show all 10 of the amazing ice sculptures that were revealed for 2019.

As the bubble wrap came off the 10 ice sculptures, the crowds immediately gathered to take pictures with them. ExplorAR.co.uk was at the event and you can see all 10 in our Durham Fire and Ice pictures below. The Fire and Ice Durham theme for 2019 was Heroes and Villains, and the ice sculptures all depicted characters from the silver screen, comic books and real life.

The amazingly-detailed ice carvings were placed in locations across Durham including Millennium Square near the Gala Theatre, Durham Marketplace, Framwellgate Bridge and Elvet Bridge, and at Palace Green and Durham Cathedral.

You can see a picture of the Maleficent ice sculpture at the top of this story. The Lego Batman in the cathedral cloisters also drew a crowd:

As did the Infinity Glove, with the colourful Infinity Stones visible inside the ice.

The Infinity Glove - which is featured in the Marvel comics and movies - was located in Millennium Square near the Durham Gala Theatre:

Read next: Read our summary of the Durham Fire and Ice show 2019

Back up in front of Durham Cathedral, on the path leading from Palace Green, was the Thunderbird from Fantastic Beasts, standing guard:

One sculpture which people particularly liked was the carving sitting on the side of Framwellgate Bridge as people went to cross.

Who are these two familiar faces? It's Ant and Dec of course, who the public chose as their local hero in a poll run by organisers Durham BID on their Facebook page:

Read next: Durham Fire and Ice everything you need to know

Over on the far side of Framwellgate Bridge, and visitors were first confronted with a charismatic hero from the silver screen - Bumblebee from the Transformers comics and films, in a characteristic pose:

Continuing across Framwellgate Bridge, and there were three more Durham Fire and Ice sculptures to find. The first was a real life hero. Water was pouring from this sculpture - but thankfully it was meant to be. The ice sculpture of the firefighter, placed on the Riverwalk next to Framwellgate Bridge, was cleverly designed with a water feature attached so that water poured through the sculpture and out of the ice hose that the firefighter was holding:

Continuing along the Riverwalk, and around the corner was the largest of the Durham Fire and Ice ice sculptures, which was of North East hero Grace Darling. In front of a backdrop of a lighthouse and rough seas, ice Grace Darling was carved in an ice boat, pulling hard on the oars. She is famous for taking part in the rescue of survivors from the shipwrecked Forfarshire in 1838. The paddlesteamer ran aground on the Farne Islands off the coast of Northumberland:

The final ice sculpture located on the far side from Durham city centre of Framwellgate Bridge was Darth Vader. This Star Wars character's familiar mask stood watching as shoppers passed by on North Road, and crowds of children gathered to have their picture taken next to his scary ice head:

At the very heart of the festival, ice carving company Glacial Art, who had created the 10 ice sculptures for the festival, performed ice carving demonstrations in the centre of Durham Marketplace, and also carried out ice carving workshops where visitors could have a go. And nearby, the last of the 10 Durham Fire and Ice sculptures was to be found. Wonder Woman stood on display, and gathered plenty of visitors to get their picture taken with the ice sculpture:

Previous Fire and Ice festival themes included Polar Exploration as well as Myths and Legends, and visitors have enjoyed sculptures including Paddington Bear, the Tin Man from the Wizard of Oz, and Shakespeare. 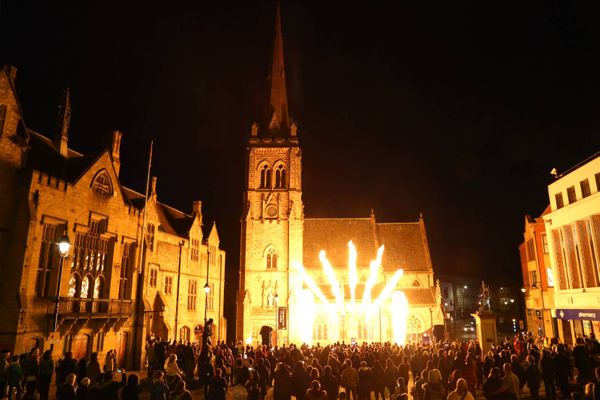 See seven Durham Fire and Ice fire show pictures. It was a flame-filled finale to the two day event, which certainly didn't disappoint. 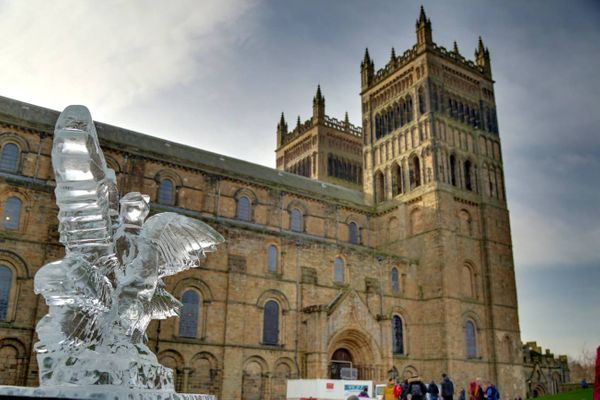 The fantastic Durham Fire and Ice festival returned to the city and visitors quickly gathered to see the 10 beautifully carved sculptures when they were unveiled on Friday morning.